Founded on the 14th of October 1937, the Entomological Society of Southern Africa promotes entomology in Africa and communication between entomologists.  It does so through the publication of its journal, African Entomology and its biennial Congresses.  The Society welcomes all who are interested in entomology, either professionals or amateurs.

Read more about the society here 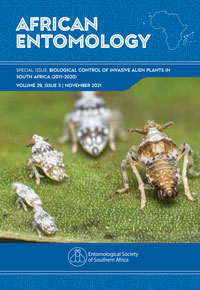 This special issue is the fourth decadal review of biological control of invasive alien plants(biocontrol of weeds) in South Africa, following those published in 1991, 1999 and 2011.Included in this issue are 24 papers covering the weed biocontrol programmes, or importantdevelopments in the science and practice, from the period 2011-2020.

Seventy-two target weed species are covered, including 25 species on which projects were initiated during the past decade. Developments in regulations, mass-rearing and implementation, and community engagement are also reviewed. An updated catalogue of agents released, rejected and under consideration is presented and reflects the most recent methods of quantifying success in weed biocontrol. Weed biocontrol is an essential component of South Africa’s strategy to reduce the negative impacts of invasive alien plants and has contributed significantly towards the protection of the country’s ecosystems, indigenous biodiversity, water security, agricultural productivity, and society in general. The papers in this issue address the major changes and developments in weed biocontrol in South Africa over last decade, addressing the successes and constraints to the science and practice.

Promoting entomology in Africa and communication between entomologists with our biennial Congresses. Have a look below at our upcoming and past events.

African Entomology is a peer reviewed scientific journal that publishes original research articles and short communications on all aspects of entomology, with an emphasis on the advancement of entomology on the African continent.  Click here to read more about our publications and how to subscribe to them.